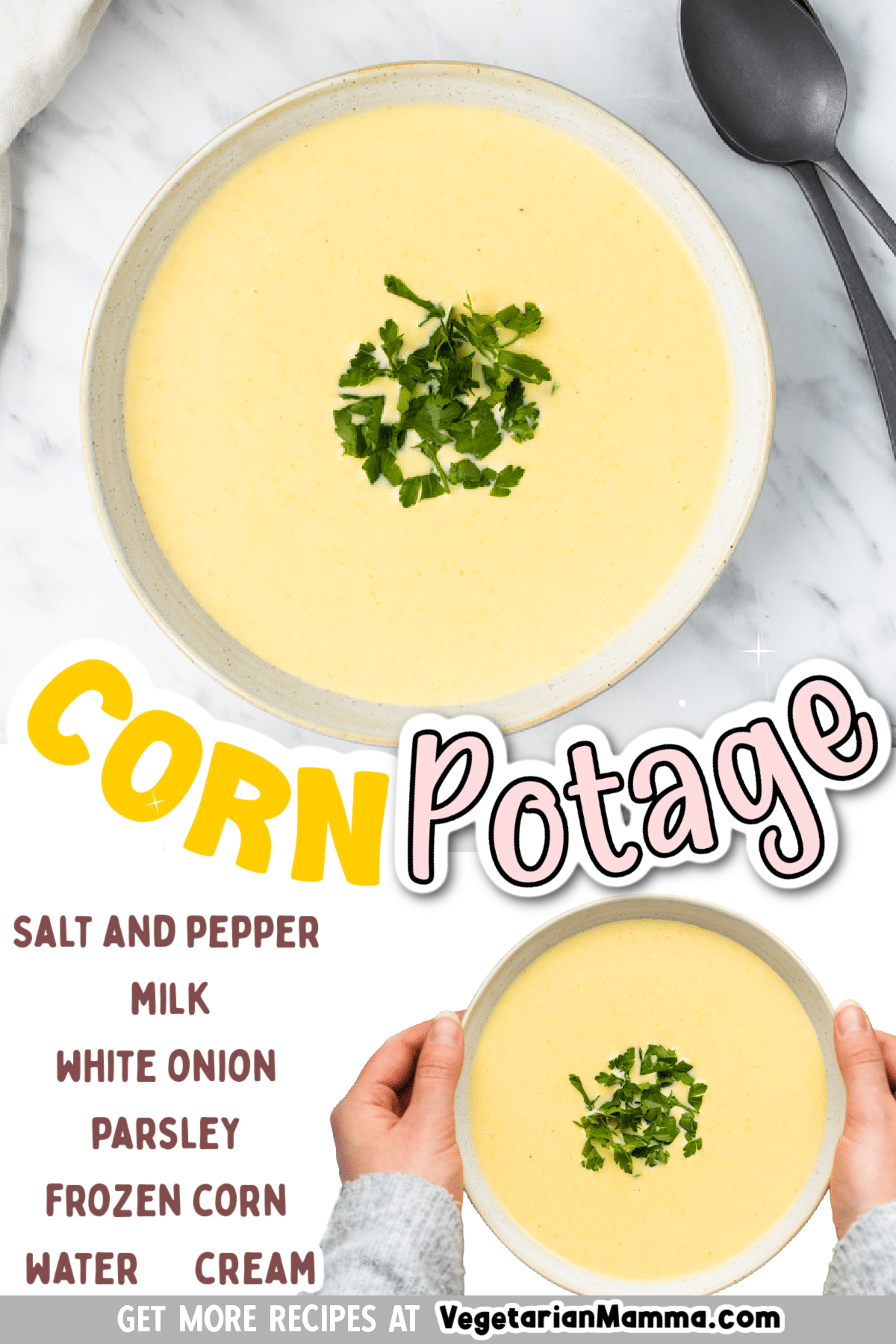 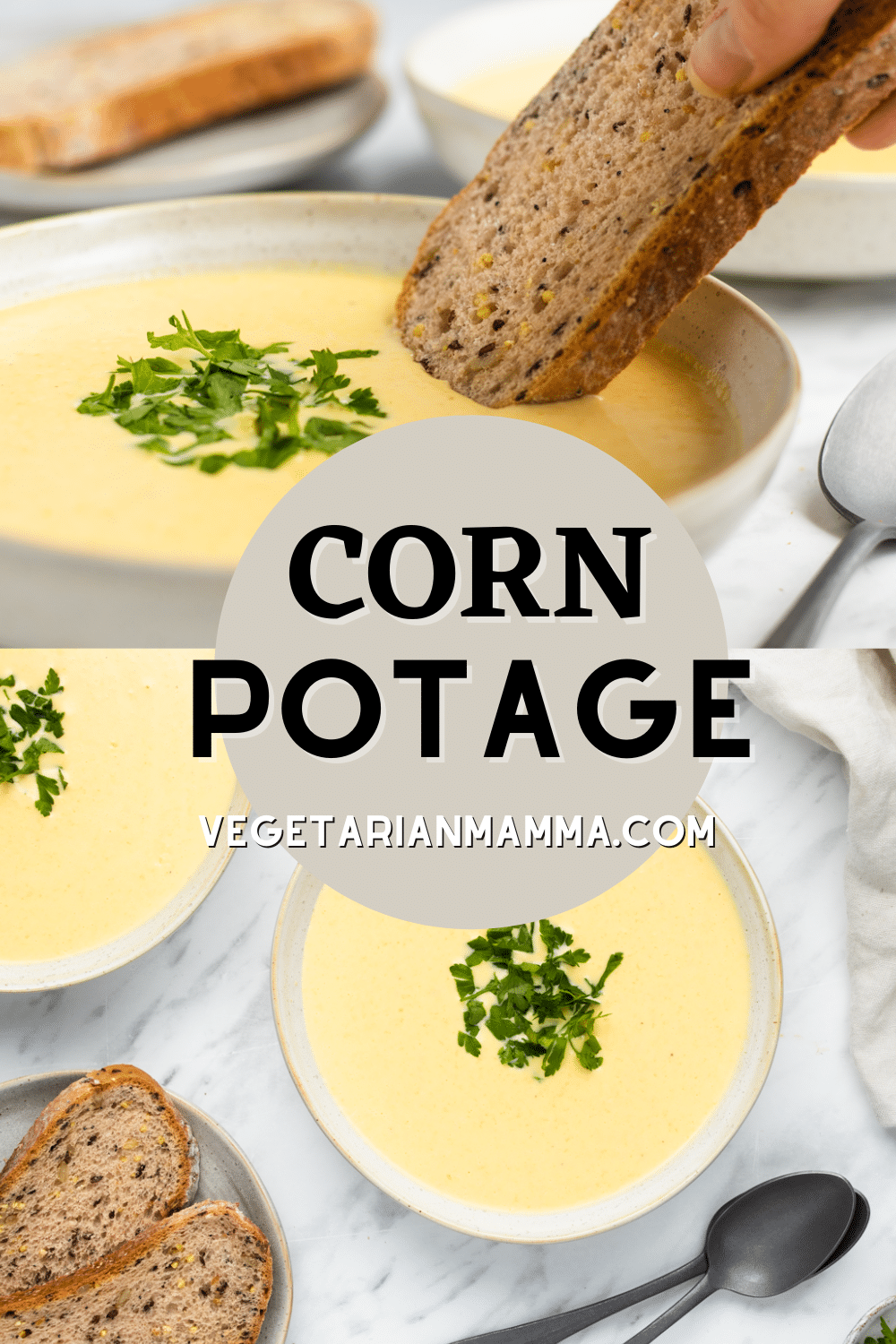 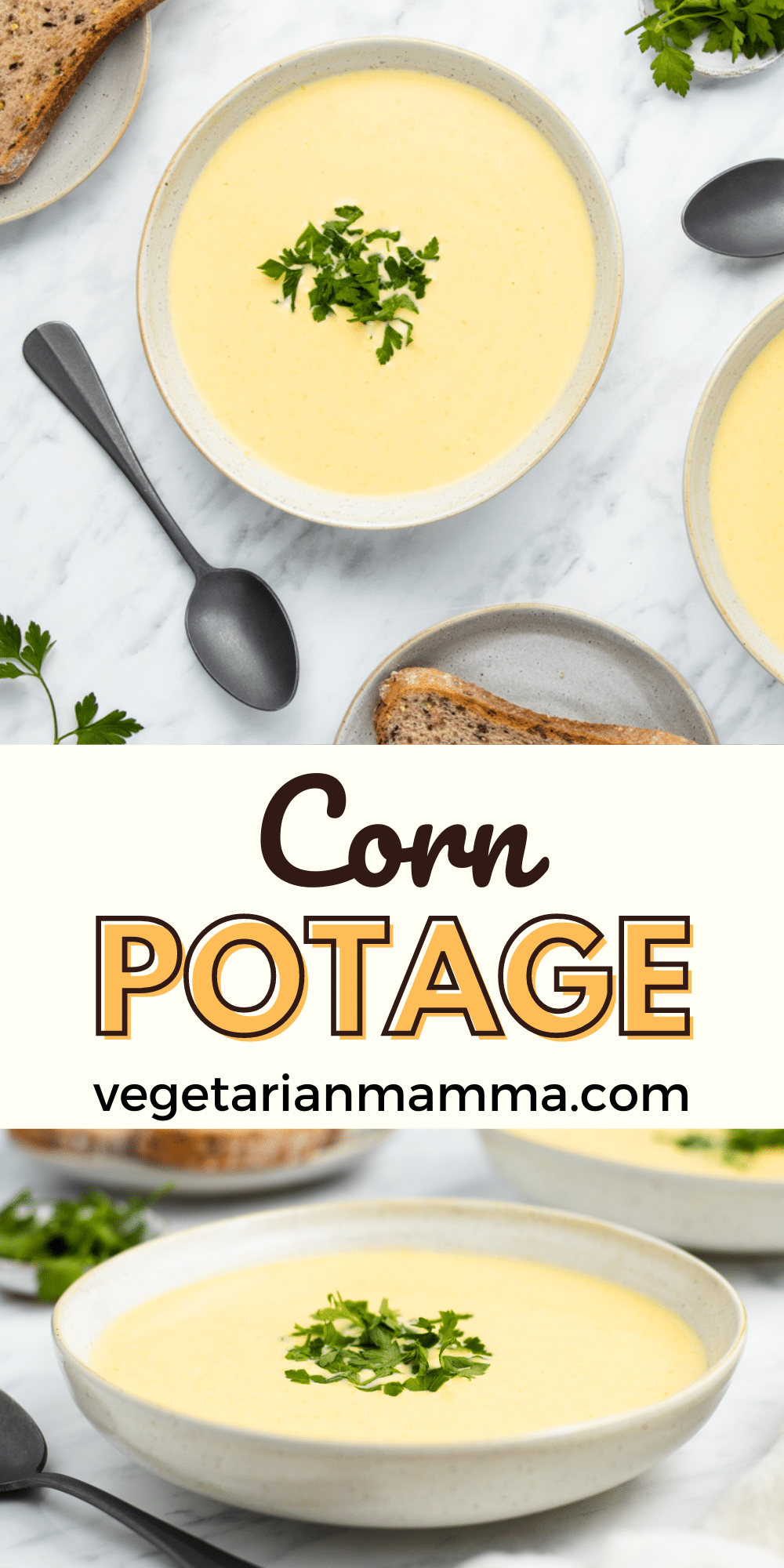 Corn Potage is a deliciously creamy corn soup, popular in Japan. You will love how easy it is to make this corn porridge using frozen corn and other simple ingredients. This vegetarian potage recipe is easy to make vegan too.

Corn Potage Soup is a western-style staple in Japan, because it is easy, creamy, sweet, and delicious comfort food. This recipe is perfect for cold winter days, but can also be a summer time delight, served cold.

You might have tried my Vegan Corn Chowder recipe before. This recipe is similar, but also very different. Corn potage has fewer ingredients, and all of them are blended together to be super smooth and light.

Making any type of soup with corn is always going to be delicious due to the sweetness that corn gives to dishes. For more delicious recipes that use corn, try making this Hot Corn Dip or Smoked Corn on the Cob. Yum!

WHAT IS CORN POTAGE?

Potage is a french word that describes a thick soup, stew, or porridge. This type of recipe has its origins in the middle ages of French cuisine and has stood the test of time.

I'm not certain how, but this delicious French Corn Potage recipe has become very popular in Japan. You can even find corn potage vending machines there! Corn potage mixes exist that allow you to combine the mix with water to make a bowl of potage, but you don't need to do that when it's so simple to make it from scratch, and it tastes much better.

You only need four ingredients, plus water and salt and pepper to make a silky smooth homemade corn potage.

Frozen Corn - You can certainly use fresh corn to make potage, but frozen corn is an accessible and perfect alternative. Check out this post if you want to learn how to freeze fresh corn on the cob in the summertime.

White Onion - Any type of white or yellow onion will work in this recipe. I like the milder flavor of white onion for potage though. Dice the onion into a small to medium dice.

Milk and Cream - A silky corn soup requires some creamy additions. a combination of milk and cream works, or you can use half and half instead. To make this recipe vegan, you can use coconut cream and coconut milk instead.

Water - This lets us blend the corn into a smooth puree. Optionally, you can use vegetable stock in place of water.

Salt and Pepper - Add salt and pepper to taste, as much or as little as you like.

If you have any questions about Corn Potage, please leave a comment and I will get back to you ASAP!

HOW TO MAKE CORN POTAGE

These numbered steps match the numbered photos above and are for illustration purposes. For the complete list of ingredients and instructions for Corn Potage, please see the recipe below.

For Super Smooth Corn Potage - Pass the corn soup puree through a sieve before mixing it with the milk and cream. This will remove some of the fibrous parts of the corn kernels, making your potage perfectly smooth and thinner than before.

For Potage with More Texture - Use a stick blender to puree the corn only partially, or only puree half of the soup in the blender.

Avoid Browning the Onions - This soup doesn't benefit much from browned onions, and the color will change if you allow the onions to brown too much or burn. Cook them on low just until they are soft and translucent.

Garnish with Herbs - Fresh Parsley is the perfect addition to this creamy soup, and adds great color. A drizzle of extra virgin olive oil is also a welcome add-on to corn potage.

Use Whatever Corn you Have - I find that frozen corn is the easiest type to use in this recipe, but you can also use drained and rinsed canned corn. Fresh corn makes amazing potage too!

Add More Flavor - The flavor of sweet corn should be front and center in potage, but you can enhance it with a bit of spice if you like. try paprika, chili powder, or a bit of Sriracha.

Make it Vegan - To make a vegan potage recipe, replace the milk in the recipe with your favorite unflavored nut milk or soy milk, and replace the cream with coconut cream.

HOW TO STORE HOMEMADE CORN POTAGE

Leftovers of this recipe will keep well stored in an airtight container in the fridge for up to three days. Reheat on the stove, on low heat, stirring well.

You can freeze homemade potage for up to three months too. Allow to thaw in the fridge overnight before reheating.

WHAT TO SERVE WITH CORN POTAGE

Bread - I enjoy a nice slice of bread or a warm roll with any kind of soup. Make dinner rolls, biscuits, or pick up a loaf of fresh bread from your local bakery. Add extra sweet corn flavor to the dish by serving Hush Puppies made in the air fryer or Air Fryer Corn Bread.

Croutons - Adding crispy bits of bread in the form of homemade croutons is a fantastic idea! Make these traditional Vegan Croutons, or try these bread-free Tofu Croutons to add extra protein to your potage.

Corn potage really doesn't need much more, the sweet and savory flavor of this dish really holds its own as a stand-alone dish.

You can serve potage as a first course for any of your favorite vegetarian meals. I like it with Asian-style meals such as Air Fryer Dumplings, Sweet and Sour Tofu, or Honey Sriracha Tofu.

HOW MANY CUPS ARE IN A BAG OF FROZEN CORN?

A 10-ounce bag of frozen corn has a bit over 6 cups of kernels in it. You can make a double batch of this delicious corn potage with a small bag of corn!

I HAVE AN ABUNDANCE OF FRESH CORN. WHAT CAN I MAKE?

Corn potage is a great way to use fresh corn on the cob! Before making the soup, steam or boil the corn on the cob until tender. Remove the kernels to get the three cups of corn needed to make this recipe. For extra flavor, use the back of your knife to scrape the corn cobs to get the milky, sweet corn milk there.

We often have access to a lot of fresh local corn in the summer. I freeze it so that I can use it all year to make recipes like this one!

Corn on the cob is delicious grilled with lemon pepper butter, or air fried with spices and cheese to be Mexican Street Corn.

Want more corn recipes? I have a bunch for you to choose from! Zucchini Corn Cakes and allergy-friendly Sweet Corn Pudding are two more yummy ways to cook with corn.

This is a delicious vegetarian recipe that has a large amount of fiber, making it quite filling for such a light soup. Made with milk and cream, it can be a bit high in calories. Overall, this from-scratch Potage is healthier than canned potage or instant potage mix though.

I prefer to enjoy this soup hot, but I have had it cold and it's very good that way as well! You can serve hot corn potage in the winter months and cold potage in the summer. It's very versatile that way.

To enjoy cold corn potage, allow the soup to cool down at room temperature after it's cooked, then transfer it to the refrigerator for about an hour before serving.

I am a huge fan of a big bowl of homemade soup. It always makes me feel good to have a steaming serving of fresh soup in front of me. Try more of my delicious vegetarian soup recipes!

Vegan Pumpkin Soup is a hearty and tasty recipe that is perfect in the fall, but also delicious and healthy for any time of year.

Ramen Soup made in the Instant Pot with tofu and greens is total comfort food and very easy to make.

Vegan Potato Soup is so thick and creamy, it's probably my favorite.

For a soup with lots of amazing flavors, you should make this Vegetarian Coconut Curry Soup. It's unbelievably good!

Have you made this recipe? Please leave a comment AND rating below! It helps other readers! 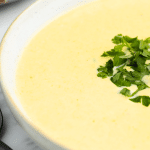 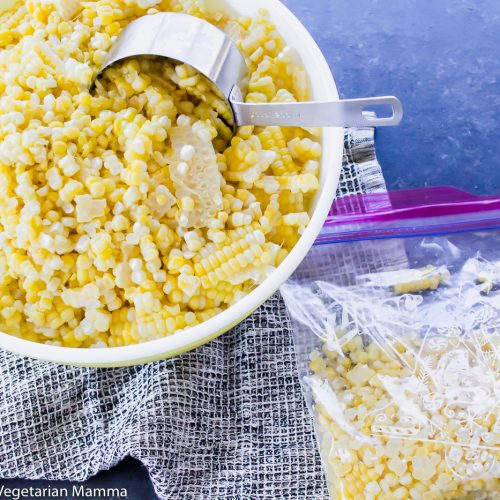 How to Freeze Corn on the Cob - Tips for Freezing Corn 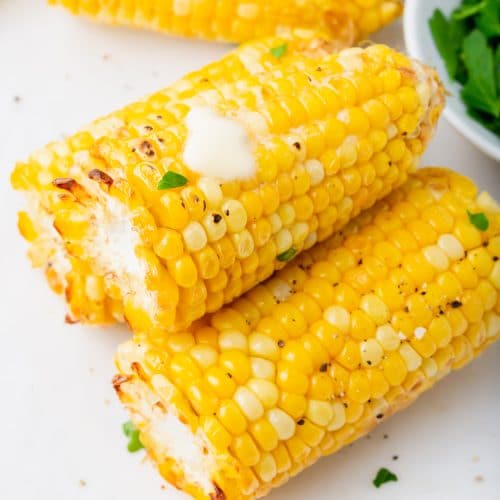 Air Fryer Corn on the Cob 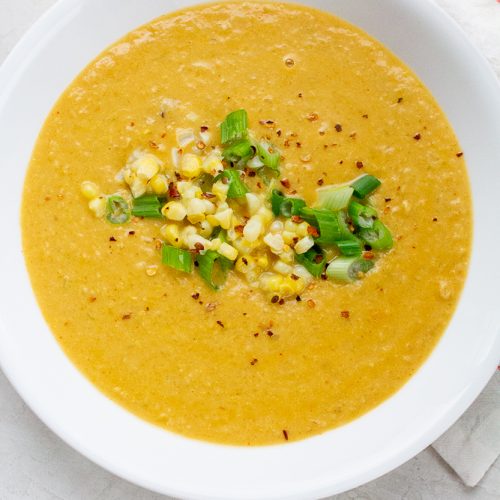 I must admit I was a little wary when I started making this, but ended up not quite believing how EASY it was! It basically makes itself! I had some bacon bits left over and added them, to add a little crunch and it was amazeballs. Honestly, the soup is delicious enough as it is, but I needed to use my bacon bits up (I hate throwing anything away! LOL). Thank you for this - I've printed it for future reference.
Highly recommended.
Wendy x

There's no cream listed in the ingredients ?

You are 100% right, I fixed that error. I apologize that our team member missed that ingredient. It is 1/2 cup cream, I've updated the recipe card. Thank you for bringing that error to my attention!